Apply continuously tunable tensile and compressive strains within a cryogenic environment. Suitable for use with scanning probe and confocal microscopy, x-ray and neutron scattering, resistivity, susceptibility and many other measurement techniques. This product is a component for use with a wide range of commercial or home-built cryogenic measurement systems. 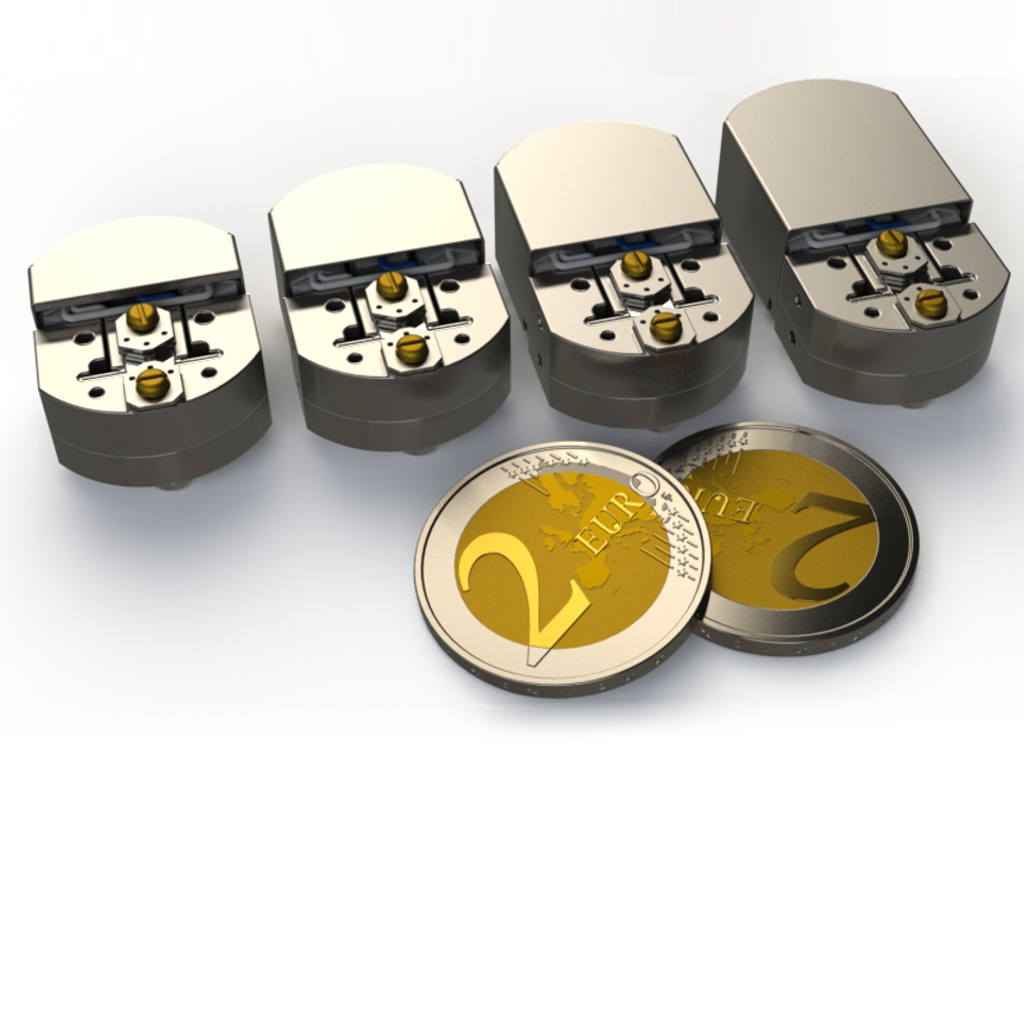 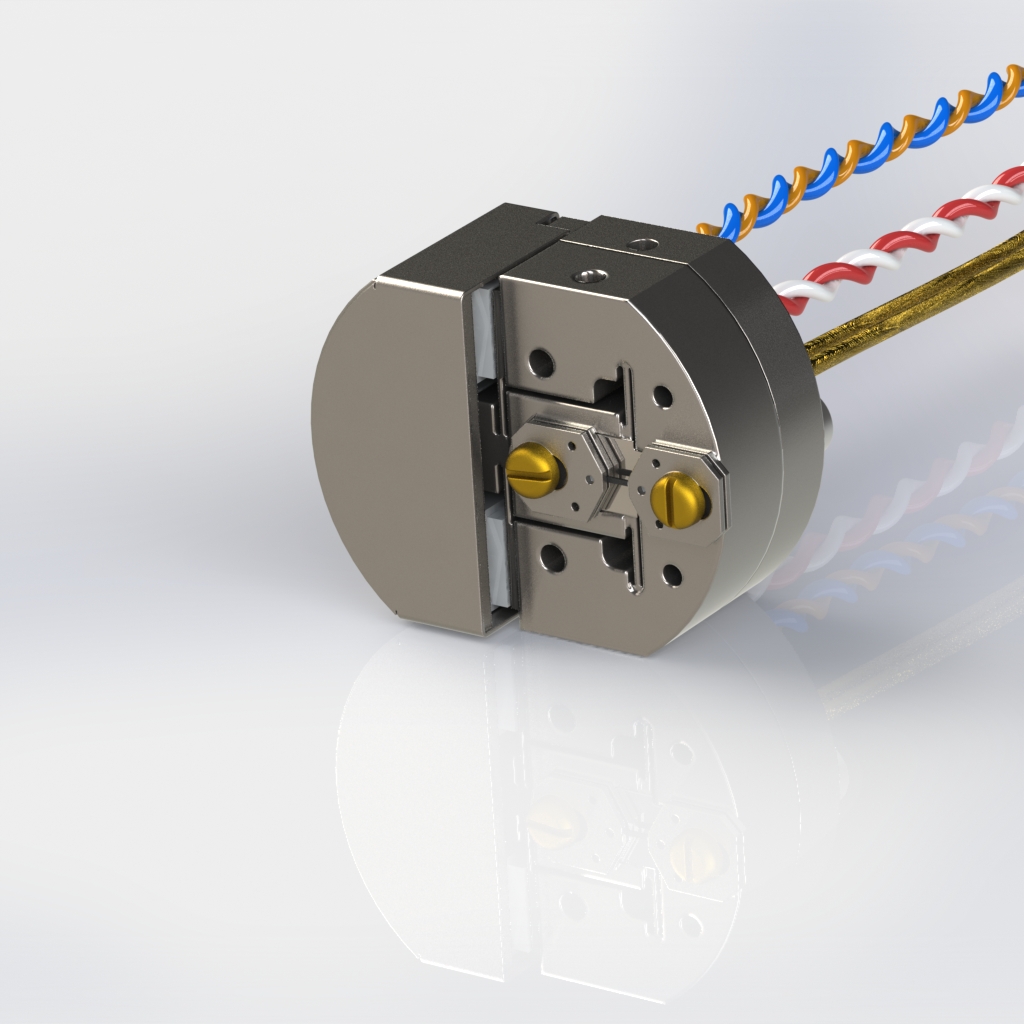 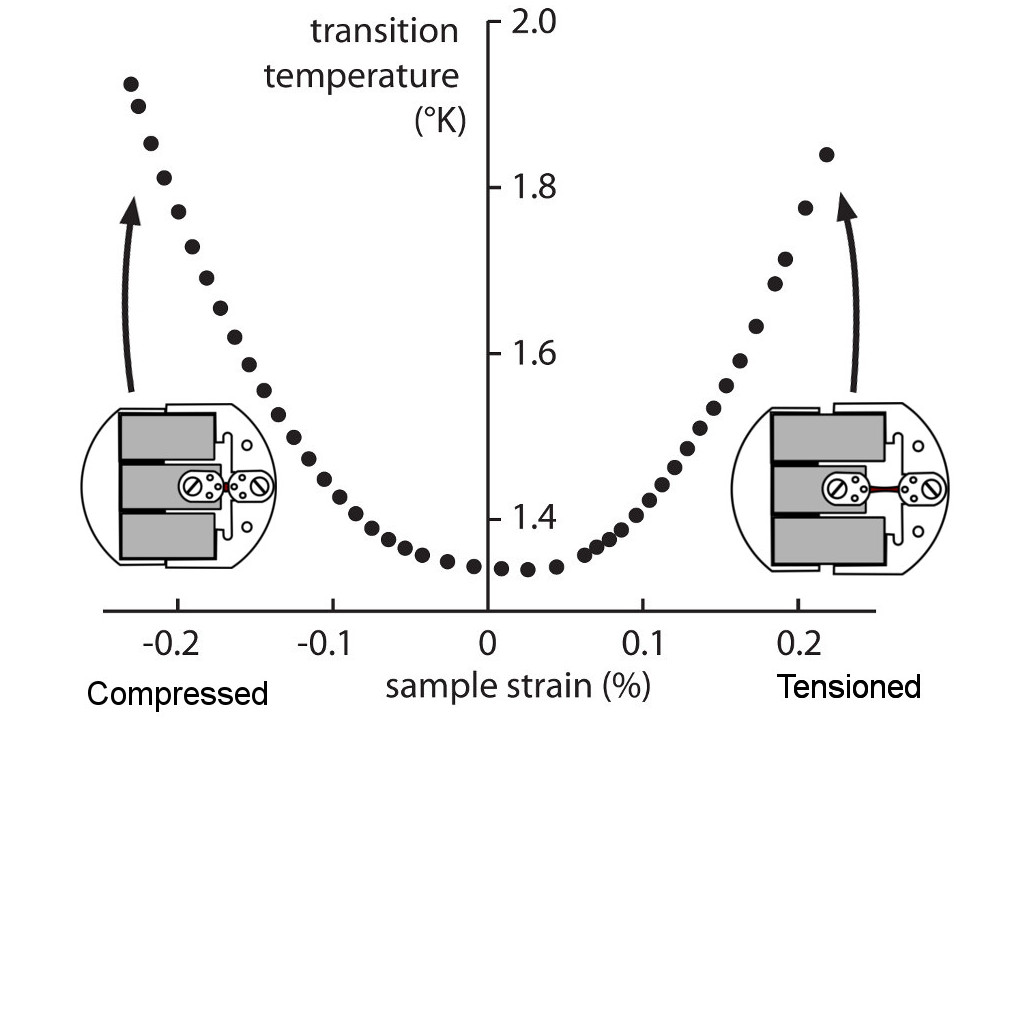 1These maximum values are only for when the cell is used to its maximum room-temperature displacement. For smaller displacements stiffer samples may be used. See the graph below for guidance.

2Sample cross sectional area based on predictions about the spring constant based on typical Young's moduli. Longer samples possible but maximum applied strain will be reduced (strain tuner displacement remains the same).

3Conventional wires can be used up to ~±200 V; contact sales team for more details.

Significant recent research effort has been spent investigating the electronic and magnetic properties of materials when subjected to uniaxial strains because it allows a convenient way to compare structure/property relationships as predicted from theory experimentally. See Uniaxial Strain in Condensed Matter Physics.

Compatible with a wide range of probes

The cryostrain cell is the ideal component for your cryogenic measurement system -  compatible with a wide variety of different probes, including x-ray diffraction, scanning probe microscopy, optical imaging and electrical measurements.

A tried and tested technology

The Cryostrain family is based on a technology that has been used in an laboratory environment for more than two years leading to several publications, including a recent high profile paper in the journal science. 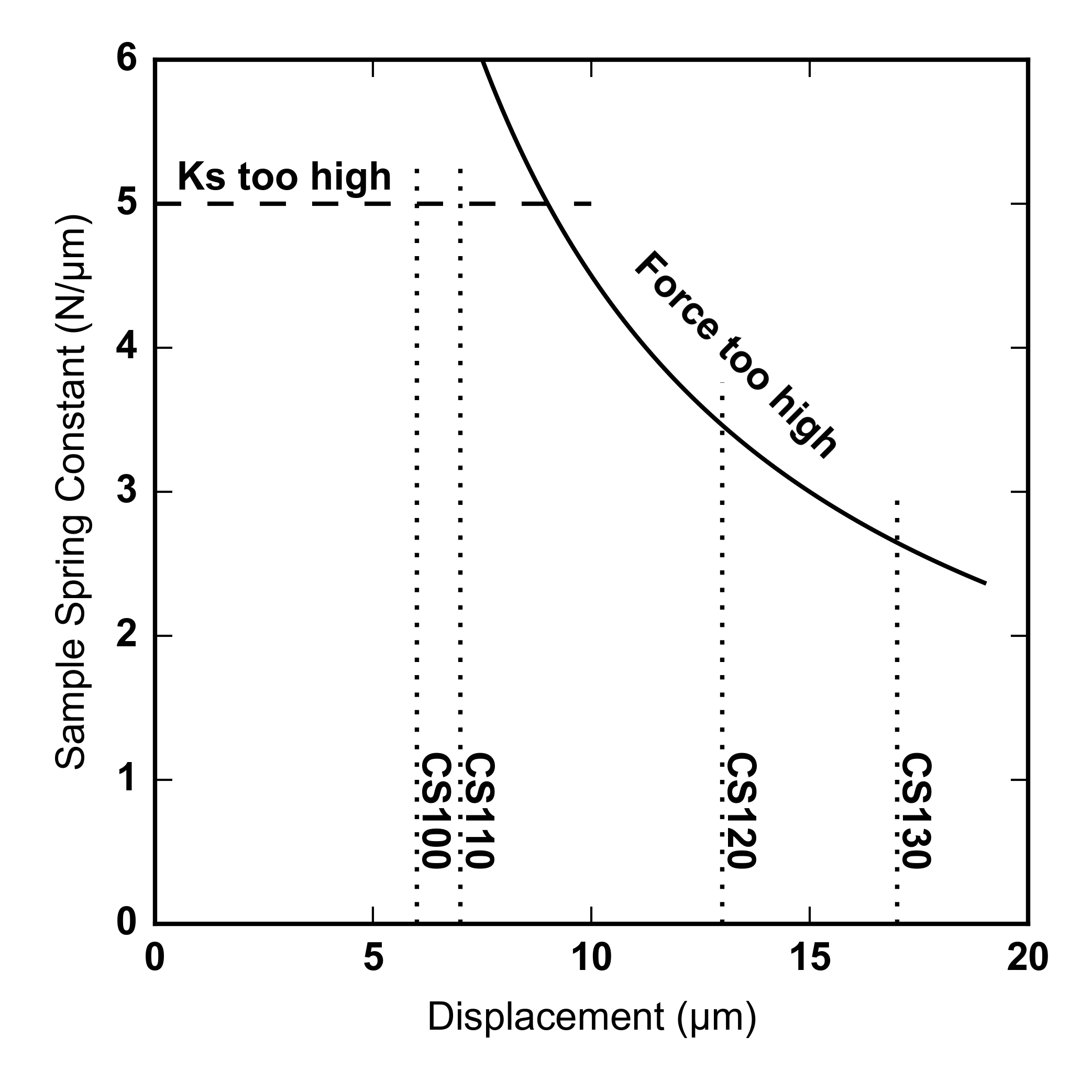 A summary of the values of acceptable sample spring constants and displacements is shown in the graph to the left.

It follows that large displacements require larger cells, with the CS130 offering the largest displacements. These larger displacements will also cause larger forces within the cell for a given sample spring constant (Hooke’s Law). At a given internal force, the strain cell may be damaged. Thus to remain under this maximum internal force, a larger cell must either apply less than the maximum displacement or samples must be used with smaller spring constants. For smaller displacements, the internal forces never reach this threshold but there is still an upper limit of 5x106 N/M as overly stiff samples will cause an unacceptable amount of twisting in the cell which will affect the accuracy of the position sensor. 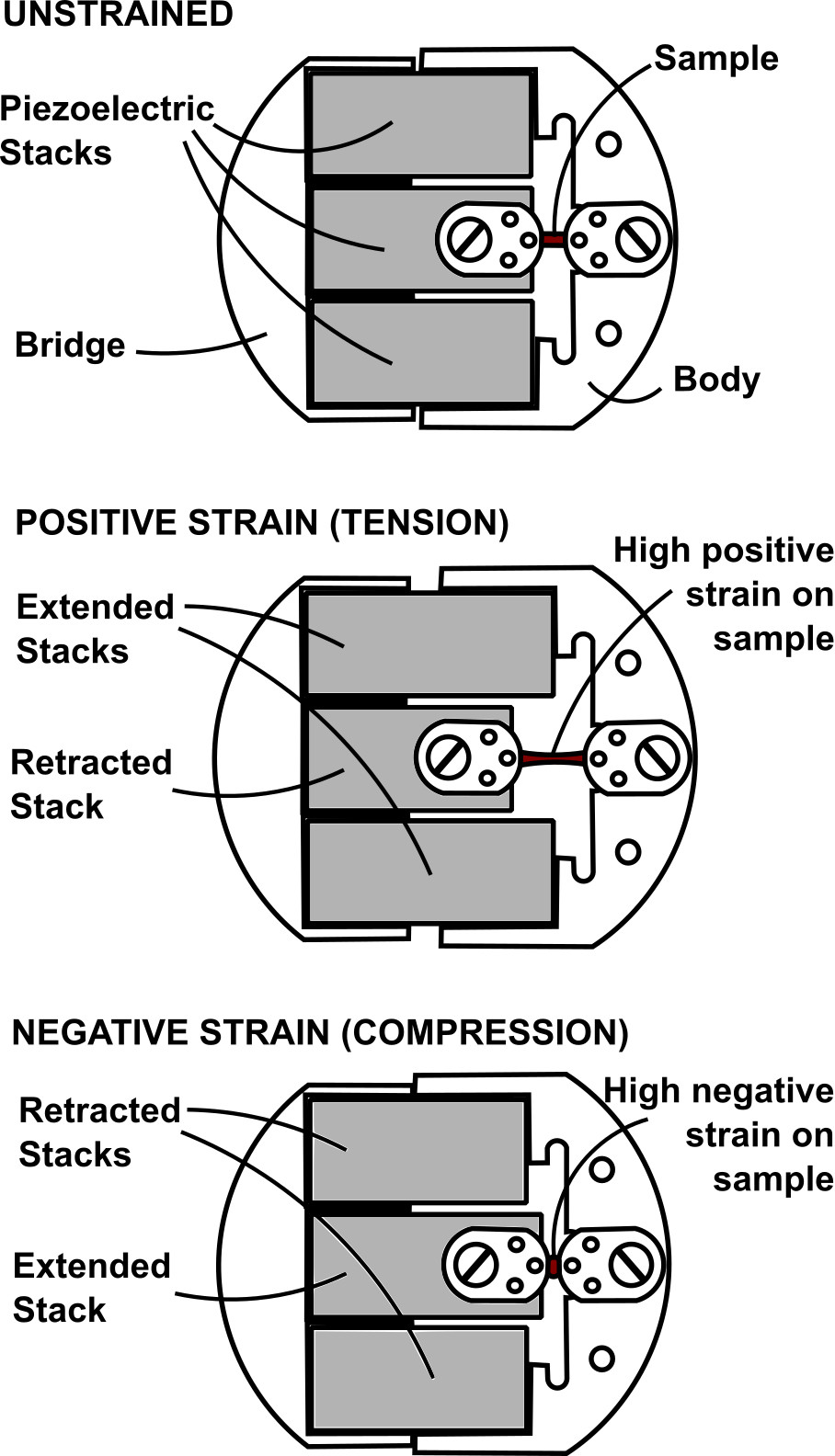 To the left shows is an illustration of the CS100 cell. The diagram illustrates the movements in the strain cell when the sample is subjected to positive and negative strains. For demonstration purposes, the movements depicted in the figure have been highly exaggerated.

Piezoelectric stacks lengthen in their polling direction upon cooling. This lengthening is many times longer than the stroke length of the stack, meaning that unless steps are taken, the strain cannot be adequately controlled when the temperature changes. The Cryostrain family of strain cells overcomes this issue with an arrangement of piezoelectric stacks that allows the thermal expansion to cancel out leaving the strain to unaffected by the thermal elongation of the stacks.

Aside from thermal compensation, having pairs of stacks working in opposition to each other means that higher displacements can be generated compared to a single piezoelectric stack glued directly onto the sample; a valuable improvement considering the intrinsically short piezoelectric stroke lengths.

Mounting the sample on the very top face of the sample maximises the angle of access. For example a scanning probe tip could scan the surface while the sample is mounted on the strain cell.

For best results we recommend that customers use the cells with the following equipment;

These datasheets contain everything you need to get started with one of our products.
They include:

These dimensioned drawings and CAD models will enable you to determine your preferred way to mount the cell in your cryostat.

To download the .STEP files, please right-click on the the download link and select "save link as..." then select where you want to save the file, specifying a .step filetype. 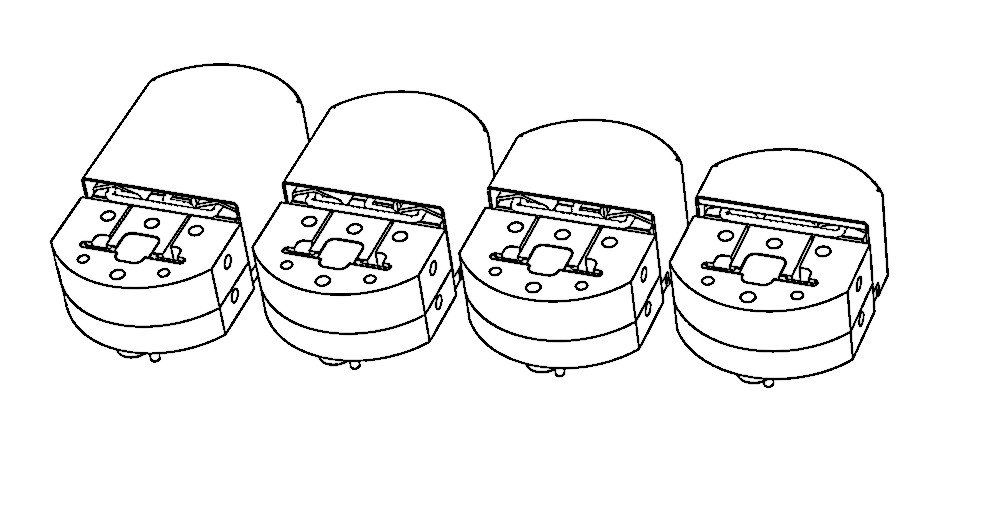 We have a large number of additional resources on our downloads page, including a guide to mounting samples and various resources to help you integrate your strain cell with your cryostat.

General Data Protection Regulation (GDPR) statement: Razorbill instruments takes the protection of your personal data very seriously. We will use use your contact details only to get in contact with you about the products you have expressed interested in by filling in this form and we will never use your information for any other purpose or sell it to any other company. This means we also do not share customer information with other customers without express permission.

If you tick the checkbox allowing us to send you a newsletter we will also send you an email a few times a year telling you about new products and hints and tips to get the most out of your Razorbill Instruments products.

For more tech specs and quotes, contact our sales team
Do NOT follow this link or you will be banned from the site!