Razorbill Instruments are pleased to announce that a whole new product category: a d31/d32 Analyser for piezoelectric polymer films, is to be launched at the  International Symposium on Advanced Ferroelectrics, ISAF, in Tours, France on the 27th-30th June 2022.  Piezoelectric polymer films are becoming increasingly widely used in a wide range of applications, and so far there has been no commercially available instrument for measuring this piezoelectric property of promising candidate materials.

This d31/d32 Analyser, ESPY31, was developed in a joint venture between Electrosciences Ltd and aixACCT Systems with the mechanical design and OEM manufacture of the complex flexure/actuator/sensor mechanism carried out by Razorbill Instruments.

Flexure systems and other compliant mechanisms offer significant advantages over conventional mechanisms. They provide precise guidance of moving parts without the play or backlash associated with slides, guides, or bearings, and in a smaller volume. Razorbill Instruments has long experience with compliant mechanisms for motion control and force and displacement sensing, including kinematic design, FEA simulation, design for manufacture, assembly and testing. Our mechanisms operate in extreme environments such as vacuum, temperatures below -290C, and high magnetic fields.

Please visit our contact page to discuss your requirements and see if our engineers can lend their knowledge to your product development. 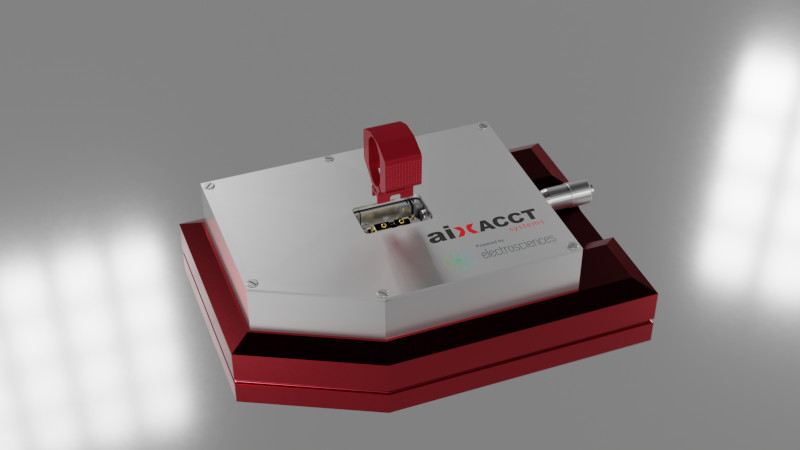 Razorbill Instruments are pleased to announce a new easy-to-use step-by-step guide for sample mounting is now available on the website as well as a techniques page that discusses other useful approaches relating to uniaxial strain tuning.

These new webpages should enable a new user of one of our devices to quickly complete their first experiment.

Please let us know if you have any further questions or if you have developed your own cool tricks for getting the best use out of a Razorbill Instruments stress or strain cell. We’d love to hear from you! 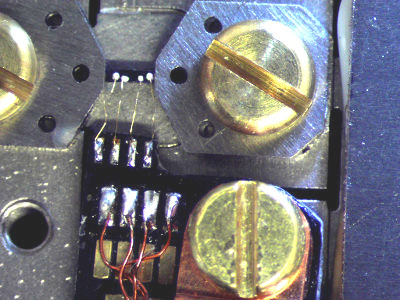 Razorbill Instruments are pleased to announce that we have launched the new cryogenic stress/strain cell, the UC200 which offers customers the highest degree of control yet. The UC200 fits inside a 2-inch magnet bore and can measure both the force and displacement applied to a sample. This allows both stress and strain to be controlled and allows structural transitions of materials to be observed in real time. 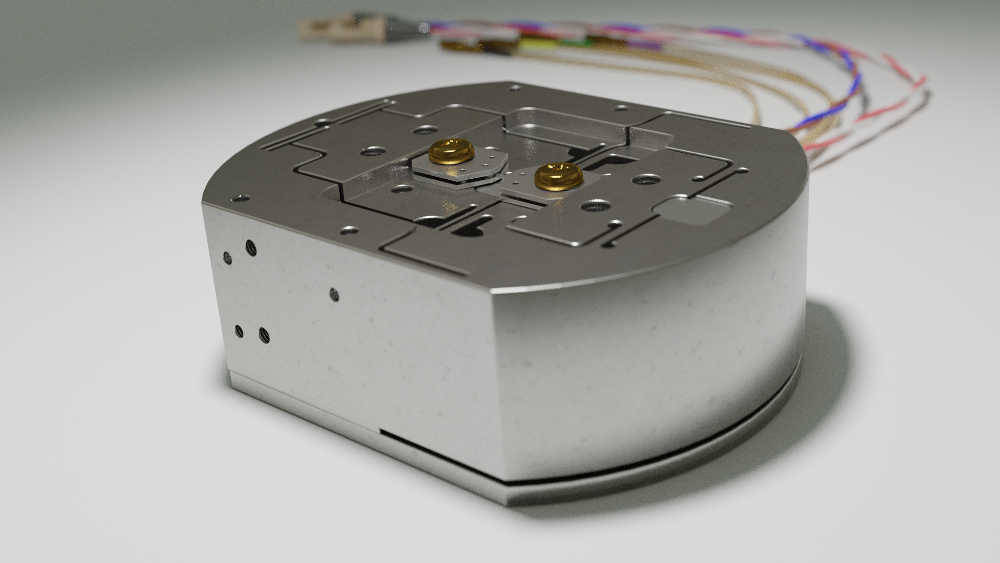 Although our facilities have been closed as a precautionary measure against the current gloabl pandemic, Razorbill is still able to answer your queries, and we have some limited stock that is ready to ship.

Please get in contact – the social interaction will perk us up! Also, if you are planning on purchasing in the near future, then we recommend placing the purchase order as soon as possible as once our current stock has been sold there are likely to be long waits before we are able to manufacture the next batch.

Keep safe and be sure to use your social distancing time to dream about all the cryogenic stress/strain tuning experiments you can do when the world returns to normal!

Razorbill Instruments are attending APS March meeting 2020 from Monday 2nd March to Wednesday 3rd March. Please drop by booth #1702 and ask our engineers really hard questions, get a chance to see and touch our products, and pick up a much coveted Razorbill branded pen. 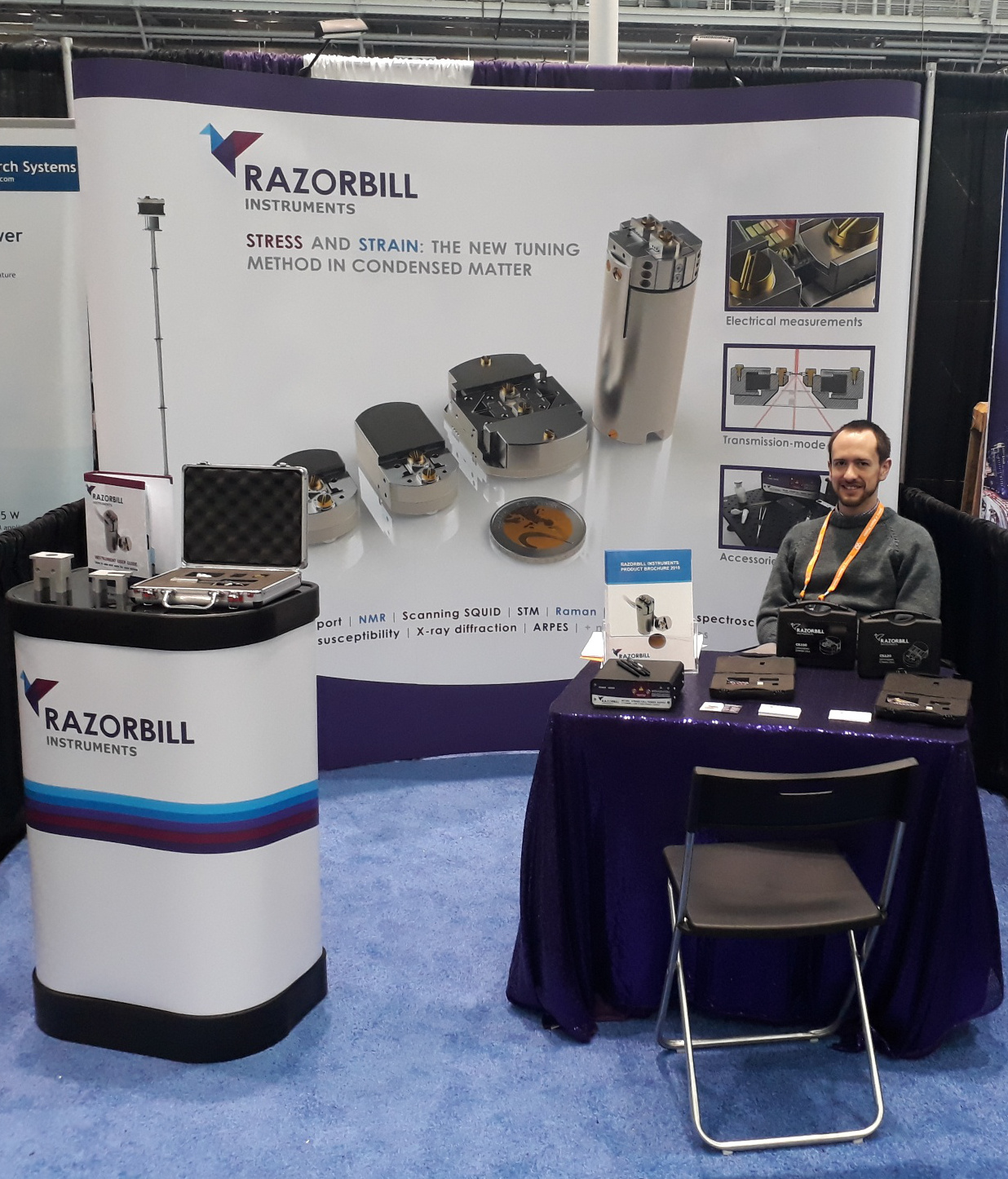 Many thanks to all of our customers and employees for a really great year. Lets make 2020 even better! 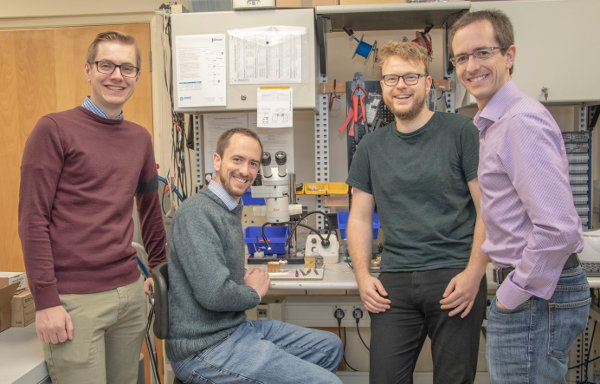 Razorbill Instruments worked with space engineers based in Edinburgh to enable tiny, toaster-sized ‘nanosatellites’ to collect crisp images of the surface of the Earth. Razorbill Instruments, a company developing products that control and measure ultraprecise movement on a nanoscale has collaborated with the UK Astronomy Technology Centre (UK ATC), part of the Science and Technology Facilities Council (STFC). Razorbill’s tech – a compact high precision sensor – aligns the mirrors on UK ATC’s HighRes nanosatellite to within an error smaller than a hundredth of the width of a human hair, when they unfold in space.

Dr Alex Ward, managing director at Razorbill Instruments, says “Nanosatellites could help scientists more accurately monitor the Earth, giving us unprecedented up-to-date views of what’s happening on our planet – including the effects of climate change.
“The Earth Observation data that is possible to collect from small satellites,” continues Alex, “could be vital in understanding the damage being done to our rainforests, providing pin-pointed relief to disaster areas, as well as providing vital insights to agriculture and logistics sectors.”

Started whilst its three founders were studying and working at St Andrew’s University, Razorbill Instruments is now 5 years old and the company’s products, which are designed and made in Scotland are being used around the world from Canada to South-Korea.

Now based at the Higgs Centre for Innovation, an ‘incubator’ hub for high tech start-ups at Royal Observatory Edinburgh, the company has maximised the opportunity to rub shoulders with the engineers from the UK ATC, who are based on the same site.
The UK ATC had been designing a ‘nanosatellite’: a tiny, toaster-sized satellite that is much cheaper and more environmentally friendly than a conventional satellite. These miniature spacecraft cost less than the cost of a luxury car to launch but can do the job of a traditional satellite that might cost in the region of a hundred million pounds.

These nifty nanosatellites, however, have one particular limitation. Because they are so small, they do not collect as much light, and produce quite blurry images. A satellite where the mirrors were folded for launch and unfurled in space, like the petals of a flower, could collect much more light and help produce sharper images. This solution would keep all the advantages of a nanosatellite while limiting the disadvantages. It was with this aim that the UK ATC developed HighRes.

To make a focussed image, however, these fold-out mirrors would need to be aligned to each other with almost unimaginable precision: after a violently bumpy rocket ride and automatically folding out in space, the mirrors would need to be aligned with an error smaller than a hundredth of the width of a human air. At the time, the only commercially available sensors that could measure this level of alignment were too bulky and consumed too much power to be used on such a small satellite.

Alex says “At Razorbill, we had already been playing around with an idea for a compact high precision sensor such as this, so it made perfect sense to join forces with the UK ATC engineers on this project. What is tremendously exciting is that future generations of this satellite, based on the UK ATC design, with Razorbill Instruments sensors, could change what we think is possible with a small satellite.”

Razorbill Instruments carried out the project to develop custom sensors for this, and similar satellites was partly funded by Scottish Enterprise, a government body that supports innovative companies in Scotland with additional funding from the European Regional Development Fund.

“For innovation to happen, the important thing is to get bright people in the same room having conversations about the projects they’re passionate about. We were very impressed with what the UK ATC engineers had achieved and it was exciting that Razorbill Instruments could offer one of the final pieces of the jigsaw puzzle to help them realize the huge potential of their nanosatellite. This project is a great example of the great outcomes that can be sparked by a chance encounter over a cup of tea,” concludes Alex. 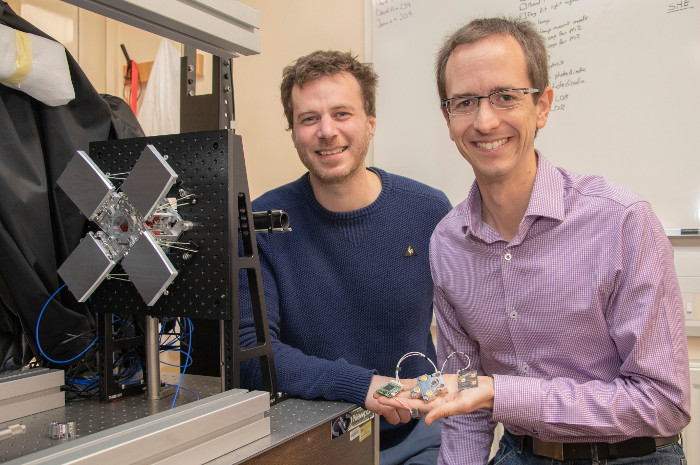 Dr Noah Schwartz UK ATC (left) developed the control system allowing the mirrors to focus. Tom Barraclough, Razorbill Instruments (right) holds the tiny sensors he helped develop that allow the positions of the satellite mirrors to be measured when they are deployed in space. Far left, the Satellite ‘HighRes’ that was the subject of this collaboration. PHOTO CREDIT: UK ATC

Sometimes it is necessary to move a stress or strain cell around inside a cryostat, for example for optics alignment or to bring the sample into range of a scanning probe. To do this it is necessary to use a cryogenic nanopositioner, and one of the most commonly used types is that manufactured by Attocube. To make it easier for a customer to incorporate a Razorbill CS100 into their set-up, we can now provide a bracket to fix a CS100 to the top of an Attocube ANPx101 positioner. Likewise, we offer a custom FC100 cell, with a reduced weight to make it compatible with an ANPx101 positioner with a baseplate that can be fixed to the existing screw holes in the Attocube positioner. 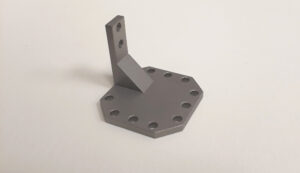 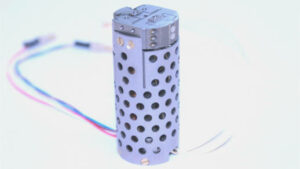 Left: The CS100 titanium  mounting bracket, to mount the device easily on top of an Attocube positioner

Unbelievably, Razorbill Instruments reached the incredible milestone of 5 years old today! Many thanks to our customers and supporters who helped us get this far. Also a big thank you to everyone who helped us eat cake and drink beer to celibrate! Onwards for the next 5 years! 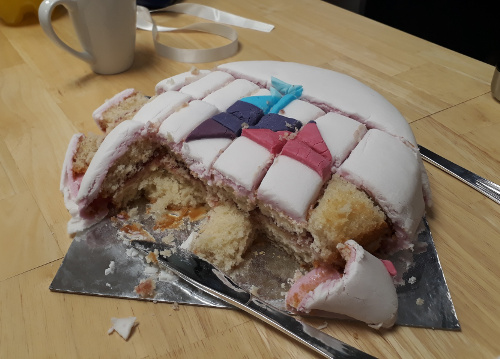 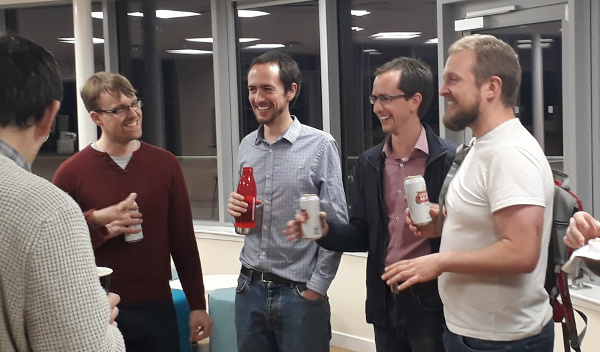 Razorbill will be attending this years European Research Group Meeting on High Pressure Science and Technology. This is happening in the first week of September in Prague. Please drop by and say “Hi” if you’re attending. We promise no high pressure sales! It may be a perfect opportunity to check out our brand new product, the CS200T (below) 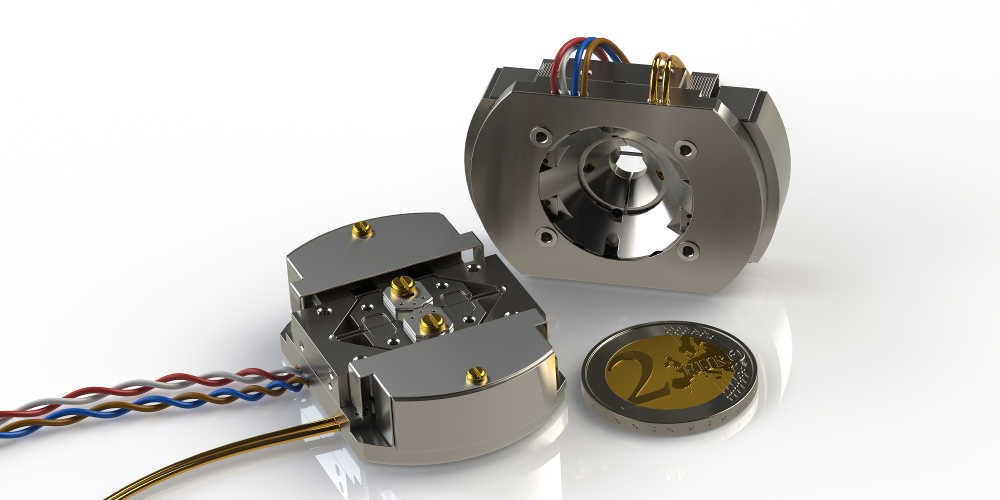