Researchers at the University of California, Davis with collaborators from Institute for Solid State Physics, TU Dresden and Ames Laboratory U.S. DOE have recently reported the observation of an intriguing magnetic phenomenon in the superconductor, BaFe2As2 which has a nematic electronic structure. The researchers were subjecting a sample of the material to uniaxial strain using a Razorbill Instruments CS100 strain cell (see picture) while probing it using NMR.

BaFe2As2 is usually an anti-ferromagnetic material, with the atomic spins of neighbouring atoms alternate between up and down meaning that the spins cancel and resultant material is non-magnetic. Intriguingly, when subjected to strain the atomic spins changed significantly, moving out of the plane of the crystal leading to a strained material that is measurably magnetic. Materials that change their magnetic properties when subjected to strain are very rare but the particularly surprising effect is that an in-plane applied strain can lead to an out of plane magnetic moment.

One of the reasons why the work is so significant is that this is the first measurement that sheds any light on the internal spin structure of the nematic order parameter in an iron-based superconductor.

For more details please see the original paper which was published in Nature Communications or the UC Davis blog post on the work. 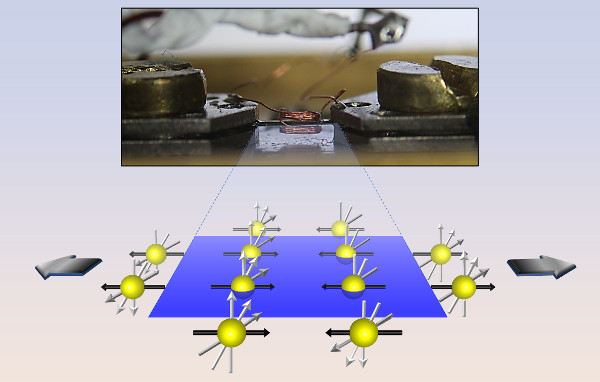 Image left. Above: A sample of BaFe2As2 is mounted between the sample plates of a Razorbill Instruments CS100 strain cell. Below: As uniaxial strain is applied to the sample, the original in-plane magnetic moments (black arrows)  start to shift out of plane (white arrows).